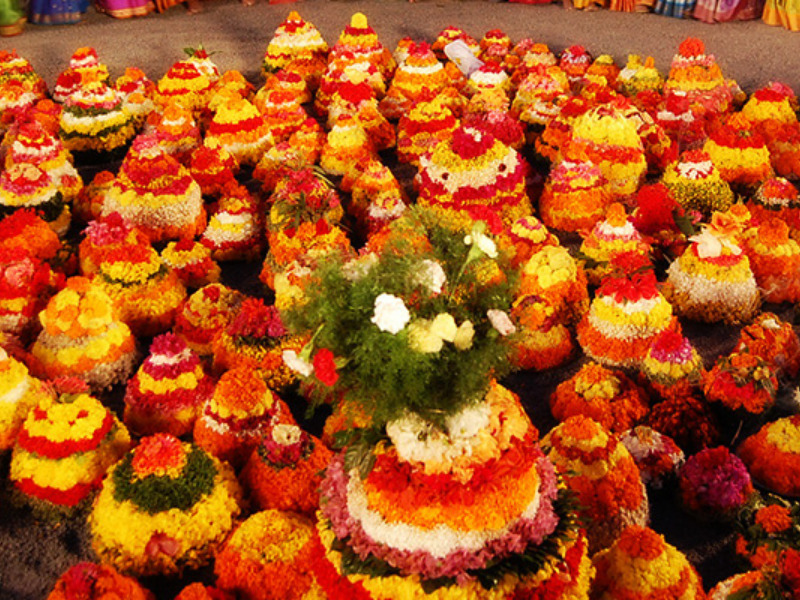 Telangana has a very unique culture compared to other Telugu-speaking regions and is a separate state from the former state of Andhra Pradesh. The festivals of Telangana are characterized by clear rituals, legends, veritable customs and colours. As such, the Telangana calendar is rich in celebrations including numerous festivals and bazaars.

Telangana festivities are unique because they are custom-made based on the legends and legends of the region. So let’s learn more about this article.

The festival of Telangana creates a fervour for the celebration of equality and unity as it covers people of all castes and faiths. Two things that are unique to the state are the universality of special worship and celebrations of female deities.

Bathukamma festival is one of the famous festivals in Telangana and is celebrated before the onset of the winter half monsoon. First, Bathukamma is decorated by beautifully placing different varieties of flowers. The women and children then identify the central Bathukamma and sing around it, clapping their hands rhythmically. Then, finally, the bathukamma is submerged in water. The reason for this celebration is that flowers can naturally purify the rivers and lakes.

Bonas is one of the traditional folk festivals celebrated in Secunderabad and Hyderabad and other parts of Telangana during Telugu Ashada month (July or August). During this festival, women prepare Bonam (copper pots) filled with milk, jaggery and rice and perform special pujas for Mahakali Amma. The jars are decorated with turmeric, neem leaves, kumkum and offered to the goddess as a thanksgiving offering on her head.

The Bonalu festivities begin on the first Sunday at Golconda Fort and on the second Sunday at Ujjaini Mahakali Temple in Secunderabad and Balkampet Yellamma Temple in Balkampet. Pochamma and Katta Maisamma Temple and Matheswari Temple in Laldarwadza of the Old City on the third Sunday during Telugu month Asadan. Other temples such as Akkana Madanna Temple in Haribouli and Muthalalamma Temple in Shah Ali Banda are famous places in Bonalu. Millions of devotees flock to the temple to visit Goddess Mahakali.

Main Attractions: Women prepare a Bonam and offer it to the goddess, Pothuraju, Rangam, Ghatam.

Where: Twin Cities and other parts of Telangana.

Dussehra is known as Dasara or VIjayadasami in the southern states of India. The festival is celebrated for ten days and each day is dedicated to a different incarnation of the goddess such as Annapurna, Lakshmi, etc. On the ninth day, Ayuda Puja is held and people pray to all the musical instruments in life. On the tenth day, the goddess is decorated as MaaDurga.

Main Attractions: The goddess wears different incarnations during the nine days, and on the tenth day she is adorned as Durga Devi.

While Ganesh Chaturthi is celebrated with great enthusiasm all over India, Ganesh Chaturthi in Telangana has its own unique charm. This festival marks the birth of Lord Ganesha and devotees perform Puja with different leaves and flowers with the utmost devotion. On the third, fifth, or ninth day, several pandaren from across the state soaked the idols in water. Several dishes considered to be Ganesha’s favorites, such as Undrallu, Modaka, were prepared.

when: August or September.

Where: All over the state but popular in Hyderabad.

Holi is another festival celebrated across the country and enjoyed by children and adults alike. This is a fun-filled festival where people, regardless of religion, get out of their shackles and have fun. The love story between Radha and Krishna is why there is a tradition of using bright colors. Holi in Telangana brings everyone together for a fun-filled experience.

Sankranthi is a harvest festival with a big celebration in Telangana. The festival is celebrated for three days; the first is Bhogi, the second is Sankranthi and the last is Kanuma. In Bhogi, people burn old things to remove negativity from their lives. The front of the house is decorated with colourful rangolis and gobbemma (dung balls). People put on new clothes, greet each other, and pay homage to the harvest. In addition, the Telangana government has organized an international kite festival on the Necklace Road by Lake Hussain Sagar.

Main Attractions: In the beautiful Rangolis in front of the house, the old people like to fly kites.

Diwali in Telangana is beautifully celebrated and depicts the triumph of good and evil. Also known as the Festival of Lights, it is one of the most important Hindu festivals celebrated on New Moon Day. The moonless sky is lit by firecrackers, and the house looks bright.

when: October or November.

The Ugadi or Yugadi festival in Telangana is marked as the Telugu New Year in the Hindu lunisolar calendar. It is also called Samvatsaradi, which means the beginning of a new year. People prepare Ugadipachadi (Kimchi) for this festival, which combines six flavors of spice, sweet and two types of sour, bitter, and salt. This pickle symbolizes the way of life that we should stand up to in both happiness and adversity.

Main Attractions: Ugadipachadi (Kimchi) is prepared with a combination of six flavors, Panchangasravanam.

when: March or April.

Ramzan is celebrated with great enthusiasm and enthusiasm in Telangana. It is celebrated according to the visibility of the moon according to the Islamic calendar. Muslims fast from dawn to sunset and avoid any food or drink, including water. Instead, Muslims eat a fast-food meal called suhur before sunrise. Halim is one of the special dishes you can find during Ramadan.

Main Attractions: Charminar is a place to buy goodies all day long, but during the holy month, beauty increases, halim, sweets of all kinds.

Muharram is an important festival for Muslims and is called Peerla panduga in Telangana. During this festival, people parade by chanting YaHussain, representing a group of Sufi shrines. Peerla panduga is a moment of great sadness as Muslims mourn the death of Imam Hussein.

Medaram Jatara is the most important tribal festival in Telangana, commonly known as Sammakka Saralamma Jatara. This fair is held every two years in Medaram village to commemorate the mother and daughter goddess Sammakka, Saralamma, who died in an epic battle. On the night of the full moon, the goddess Salama was brought from the village of Kaneboinapale. This was followed by the acquisition of Goddess Sammakka from the town of Chilukla Guta. It is estimated that nearly 130 million people attend this Jatara, second only to Kumbh Mela.

Peddagattu Jatara is the second largest religious gathering in Telangana and is celebrated every two years. It is Jatara celebrated in the name of Goddess Choudamma and Lord God Lingamanthulu. During the five-day festival, various pujas are offered to the gods because they are believed to be the incarnations of Lord Shiva and his sister Choudamma. An estimated 100 to 1.5 million devotees attend this jatara.

Nagsanpalli is a small district of Medak district that celebrates Eduplapaya Jatara every year during Shivaratri period. The name means the confluence of the seven rivers of Manjeerariver, and it has acquired religious significance over the years. Devotees from all over Telangana come to wash away their sins and pay homage to the gods, and it attracts nearly half a million pilgrims. People sacrifice chickens and sheep to please the goddess and ask for their wishes to be fulfilled. This jatara becomes even more special as most of the devotees stay at the place for at least one night.

Main Attractions: Shops and stalls selling all kinds of things.

Telangana people celebrate Kurumurthy Swamy Jatara in November for seven days. This temple is considered to be the Tirupathi of the poor and many devotees participate in this jatara for prayers and offerings to Lord Vishnu. Ttthhhe Sri VariUddavaSeva is an important part of Brahmotsavalau celebrations, where the shoes of the lord are presented to Kurumurthy Swamy in a procession attended by thousands of devotees.

Komravelli Mallikarjuna Swamy Jatara is celebrated at the temple of the same name in Komuravelli village, Siddipet district. Devotees pray to Lord Shiva at this jatara and observe it during Maha Shivaratri. Another attraction of the mela is that the Oggu Pujari group painted a special rangoli in front of the temple balcony. At least 10,000 people from all over Telangana participated in this jatara.

Celebrated at the temple of the same name in the village of Gajula Ramaram in Hyderabad, ChittarammaJatara is considered one of the state’s famous festivals. Celebrate it according to the Telugu calendar during PushyaMasam. Chittaramma is the grama devata or local goddess of the village of Gajularamaram. People from all over the state come to the temple for prayers, with more than 300,000 devotees.

Main Attractions: A large number of people gathered to pray to the goddess.

The Yadav community in Hyderabad celebrates the Sardar festival in Telangana with great enthusiasm. It is celebrated on the second day of Deepavali and it is also known as Dunnapothula Panduga. owner…