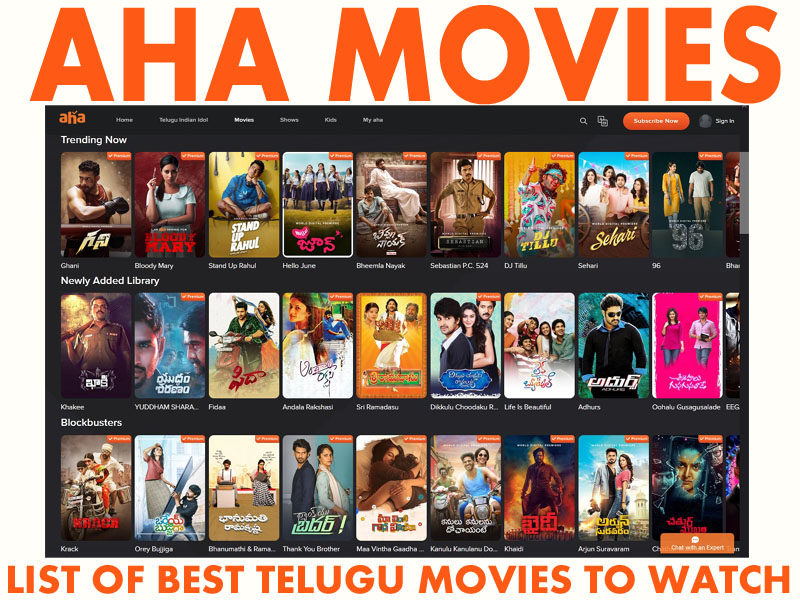 Aha, streaming services! If you’re a devoted watcher of OTT content, you already know the name. Aha is one of the largest on-demand OTT streaming platforms in India, offering mainly Telugu movies. It was launched in 2020 and in just a few years, the platform has gained a huge following and subscribers worldwide. There are some great movies on the streaming service that are a treat for movie lovers.

If you’re thinking about subscribing to Aha or searching here for something to watch, we’ve got something for you. We have compiled a list of the best Aha movies in Telugu. So, let’s go check it out!

List of 20 Best Telugu Movies for Streaming in Aha OTT 2022:

Naandhi is one of the must-see movies on the Aha platform. Set in courtroom drama with a grim plot, this thriller and suspense film explains the importance of Section 211. Allari Naresh returned to the mainstream years later with this hit film depicting a prisoner awaiting trial. If you like movies that appeal to you, this is one of the best movies to watch.

The film received fairly good reviews. The film revolves around the love story of a young couple facing problems because of their “color.” It’s an interesting take on today’s obsession with color and touches us with heartfelt feelings and emotions. This new film is equally entertaining and a good one of the year.

Do you like sports movies? If so, Super over is a must see! Set against the backdrop of cricket and gambling, the film gives it a sensible and interesting angle. Moreover, the unexpected twists and turns of the film’s storyline make you feel good when you watch it!

If you like popular movies, Krack Movies will impress you. Iconic Ravi Teja returns to the stage with this fantastic film, full of great music, gripping performances, performances and powerful looks. It’s a top-notch entertainer if you like drama-based action movies. Actress Shruti Haasan does full justice to this beautiful story.

The short film Metro Kathalu is a drama set in the metro city of Hyderabad. It tells the stories of the people in the city and tells in an interesting way their choices and twists and turns in the urban environment. It’s artistic, has a creative storyline, and is a good entertainer. see this!

We’ve all heard the hit movie “Love Story” with stars Naga Chaitanya and Sai Pallavi. This adorable TV series revolves around a young couple looking to fulfill their dream of moving to the city. Shekar Kammula’s recently released film was well received in theaters and is now being watched in Aha. It’s one of the new Telegu movies to watch on the Aha platform.

7. The most eligible bachelor:

The family drama revolves around a young man, a qualified bachelor in the family circle, ready to marry a woman his parents approve. However, things don’t go as expected when he falls in love with a comedian’s woman, and the parents don’t approve of the game. It is a good entertainment watch. Check out these latest Telegu movies at Aha.

It’s quite challenging to find a movie that’s full of horror and comedy these days. The movie Zombie Reddy is such a good choice. It takes an interesting look at the covid pandemic in the world and places it between two villages in Rayalaseema. So, if you are looking for a one-of-a-kind watch, this is the best option!

If you’re someone who likes old classics and a retro feel, this is a good movie to watch. The mail is about technology coming into our modern life, when villagers were fascinated by the concept of computers coming into their area, while setting up a game center. The film is based on simple drama without chaos and heavy feelings. So be sure to check it out on Aha’s list of new movies!

This film is an exciting take on the athidhi/guests in our home and how things can take a turn when the guests have different plans besides staying home. It’s a suspense drama, and recent movies have captured this theme well. If you’re looking for a new type of movie to indulge you, this is a great watch.

It is one of the unique movies in Telugu at the moment. The film follows the drama of five young people whose lives are most unexpectedly connected without any direct connection or connection. It’s an excellent new age movie and one of the gems to watch right now. This is one of the exciting watches in Aha’s latest Telugu movies list.

Icon Rajendra Prasad returns to cinemas with the film. The drama tells the story of an actor who loses his voice in an accident but dreams of performing on a theatrical stage. It’s a beautiful film full of comedy, heartfelt scenes, and creative reflections on the issue. Worth seeing is the superb performance by Rajendra Prasad.

A new age Telugu romance drama Amaram Akhilam Prema follows a young girl who gets in the way of her relationship with her father because of a mistake and decides to make a change and win her back. At this moment, she met her true love! The movie has a unique storyline, and it’s a good watch if you like romance movies.

Nikhil and Lavanya Tripathi, starring Arjun Suravaram, is a new age crime drama tackling the state’s credential scam. The film is unique in both script and storyline, and it’s captivating even after watching it a few times. It has a gripping plot and great performances from both leads. see this!

Orey Bujjiga is a simple film based on romance and comedy. It tells the story of two young men who run away from home to get married, leaving their families to think they eloped together. The rest of the story is comedy and romance, offering a fresh perspective on a new generation of issues.

Khaidi is one of actor Karthi’s super hit movies. This thriller follows the actor, an ex-convict, struggling to meet his daughter years later. However, unexpected things took turns involving police officers and drug raids. This is a must see for anyone who loves serious dramas. Casey’s performance earned the film a huge round of applause at the box office.

Starring Lavanya Tripathi and Kartikeya Gummakonda, the film follows the lives of two people with completely different family backgrounds. It’s an emotional roller coaster, and it’s a must-see for the brave man who can handle the strong emotions inside. Also, it’s a good watch for anyone who likes theatrical movies.

The OTT special edition movie Bhanumathi and Ramakrishna is about a romantic comedy handled in a very creative and mature way. It’s a simple good movie for a weekend, without any unexpected twists and turns, going well and entertaining the audience.

If you like his looks and performances, Dulquer Salman’s Kanulu Kanulanu Dochayante is a delight to watch. The film is even available in Tamil and revolves around crime mysteries and entertainers with unexpected twists and a fantastic storyline. The episode will keep you excited and keep you engaged!

Another interesting movie this season is commercial entertainer Mental Madhilo. The film’s plot revolves around the hero, who is often stuck and confused about his life choices, and how he handles it when he falls in love with two beautiful women. Here’s an excellent contemporary entertainer to check out!

We hope you enjoy this list of must-see Telugu movies about Aha. They are good movies to subscribe to and worth checking out. So let us know what you think. Have you seen any of the movies on this list?