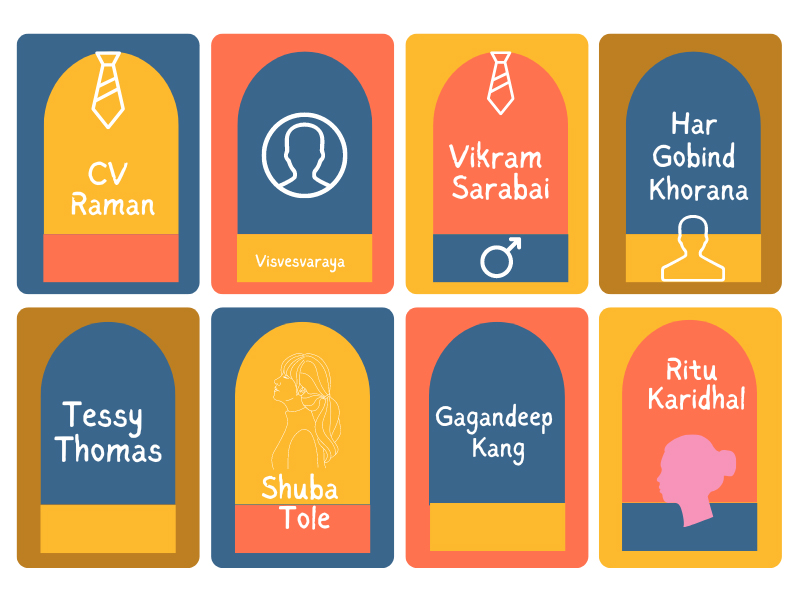 How many famous Indian scientists’ names do you know? With the advancement of science, technology and innovation in the modern world, several Indian scientists are little known but their contributions should be remembered. These scientists have been praised for bringing India’s name to the forefront and for their dedication to scientific advancement. They have worked in different fields and their inventions are truly unique.

Today, let us review the famous male and female scientists in India. Getting to know our Indian scientists was truly insightful, inspiring and a great learning experience.

The names of 20 famous Indian scientists and their inventions:

Let’s start by knowing the names of ten famous female scientists in India. These names must really be remembered; as very few women are known for stepping out of gender boundaries and being the first to advance scientifically in India. So let’s learn more about these great Indian women scientists and broaden our knowledge!

Asima Chatterjee is from West Bengal, India, known for his contributions to organic chemistry. Asima is the second woman in India to receive a PhD in Chemistry from an Indian University. She studied at the University of Calcutta. She worked during the development of the anti-epileptic drug Ayush-56. In addition, she is known for her research on antimalarial drugs and alkaloids. In addition to other awards such as the CV Raman Award and the PC Ray Award, Asima has received the Padma Bhushan Award from the Government of India for her contributions to science.

Chandrima Saha was the first Indian female president of the National Academy of Sciences of India. She is a biologist and was elected into the science academy in 2008. She specializes in cell biology and worked on the Leishmania parasite that has the potential to cause Kala Azar. Chandrima’s research has received several awards and recognitions, such as ICMR’s Shakuntala Amirchand Award, DNA 50th Anniversary Special Award, etc. She has contributed to more than 80 research papers. She is really inspiring for modern women scientists! She is by far one of the most popular female scientists in India!

Shuba Tole is an Indian scientist in the field of neuroscience. She is known for her discovery of maternally regulated genes that control the cerebral cortex, hippocampus, and amygdala. Shuba works at the Tata Research Institute for Fundamental Research (TIFR) in Mumbai, India, and received the prestigious Shanti Swarup Bhatnagar Award in 2010.

Another lesser known scientist from India but worth our attention is Darshan Ranganathan. She worked in bioorganic chemistry and was one of the earliest female students at the University of Delhi. Darshan Ranganathan has devoted his life to supramolecular assembly, molecular design, and synthesis of functional hybrid peptides and nanotubes. She became a Fellow of the Indian Academy of Sciences in 1991 and even received the prestigious Third World Academy of Sciences Chemistry Prize in 2000 for her achievements.

Paramjit Khurana is a famous scientist for her invention of all weather seeds. She has devoted her life to developing drought-resistant hybrids of wheat, rice and mulberry. These hybrid train seeds can help farmers grow crops completely dependent on weather conditions. Seeds are especially heat-resistant and have a higher UV radiation capacity.

Most of you have probably heard of this name! Mangala Mani was ISRO’s first female scientist and is affectionately known as “ISRO’s Polar Woman”. She spent more than a year in Antarctica, where she was part of a 23-member team that took part in the expedition. Mangala Mani spent about 403 days operating and maintaining ISRO’s space station in southern Antarctica.

Tessy Thomas, also known as “Miss India”, is the general manager of Aviation Systems. She has also been associated with the Agni IV Missile Program Director at the Defense Research and Development Organization (DRDO). In fact, Tessie Thomas was India’s first female scientist to lead a missile program, and it has grown in popularity, especially after the launch of the Agni series. Her contributions to supervising and mentoring several young scientists in task design and stimulation are noteworthy. She received the Lal Bahadur Shastri National Award and the Agni Self-Reliance Award.

Ritu Karidhal is the mission leader for India’s famous Chandrayaan-2 mission. She has been working on the execution and detailing of the craftsmanship and has been dubbed the “Rocket Woman of India”. Ritu Karidhal has been associated with ISRO since 2007 and also serves as Deputy Director of Operations for India’s famous Mars mission Mangalyaan. She has received several honors and awards, such as the ISRO Young Scientist Award.

Charusita Chakravarthy is a well-known woman who studies the effect of molecular base changes on DNA proteins. Specializes in molecular dynamics, liquid structure and dynamics; and is committed to contributing in the field. She even won the Shanti Swarup Bhatnagar Award and the BM Birla Science Award.

Gagandeep Kang is known for his work on the development, spread and prevention of intestinal infections in Indian children. She is Executive Director of the Translational Health Science and Technology Institute in Faridabad and Chair of the World Health Organization’s Advisory Group on Immunization Technology in Southeast Asia. In fact, Gagandeep is the first woman scientist in India to be elected as a Fellow of the Royal Society, the oldest scientific institution in the world. She devoted her life to human immunology research in India.

Most of us often hear the names of very famous Indian male scientists, especially the great men who were at the forefront of inventions in the decades before the country’s independence. However, it is worth knowing the most famous names who have contributed their lives to the advancement of science. So, let us see a list of some famous Indian male scientists and their inventions.

CV Raman is widely known in India for his contributions to physics. He was the first Asian to win the Nobel Prize in Science and devoted his life to the study of scattering of light. Born in Tiruchirappalli, Chandrasekhara Venkata Raman is known worldwide for his pioneering discoveries, also known as the “Raman effect”.

Another famous Indian scientist with a worldwide reputation is Homi J Bhabha. Homi Jehangir Bhabha devoted his life to developing quantum theory. He was also the first chairman of India’s Atomic Energy Commission and launched the nuclear program in the country with then-famous Congress leader Nehru. Homi Bhabha is still widely regarded as the father of nuclear energy in India. His advice and findings relate to how atomic energy can be used in the country to help the poor. He really is a role model!

Mokshagundam Visvesaraya was a very popular Indian engineer and scholar. Visvesaraya’s name often echoes his proposals for India’s equality with other industrialized nations, and his focus on developing through industrial routes. He invented block irrigation systems and automatic gates and was awarded India’s highest honor, Bharat Ratna.

Venkatraman Radhakrishnan is a globally renowned astrophysicist known for his work in the design and manufacture of ultralight aircraft and sailboats. He has devoted his life to researching mysteries, interstellar clouds, and celestial bodies, and is a fresh-faced space scientist. He is also a member of the Royal Swedish Academy of Sciences.

Satyendra Nath Bose is an Indian physicist working on quantum mechanics. Born in Calcutta, SN Bose has been remembered for his work on particles called “bosons”. He was also popular for Bose-Einstein statistics, for which Bose studied “Planck’s Law and the Light Quantum Hypothesis” and shared it with Einstein, who praised him and took the name of Bose Translate it into German.

Most of us know Meghnad Saha as the lead architect for the Damodar Valley project in India. However, did you know that he is also popular for the Saha equation? Meghnad Saha worked on the thermal ionization of elements and made the discovery of the Saha equation, which changed the course of research in astrophysics.

Another very famous and famous scientist in India is Srinivasa Ramanujan. Born in Tamil Nadu, Ramanujam is a popular Indian mathematician. He has contributed to number theory, fractions, infinite series, and mathematical analysis. Sadly, Srinivasa Ramanujan passed away at the age of 32. However, from childhood, he was known as a genius who mastered mathematical techniques in just 13 years.

Born in West Bengal, India, Jagadish Chandra Bose is a multi-talented scientist. He was a physicist, biologist, polymath, archaeologist and botanist. JC Bose is known for his contributions to research into radio and microwave options. He was one of the first beginners in India to contribute to experimental science through plant research. His name will be remembered as one of India’s leading physicists.

Har Gobind Khorana was a famous Indian biochemist who was awarded the Nobel Prize in Physiology or Medicine with Robert W Holley and Marshall W Nirenberg. Together with two international scholars, he studies nucleic acids that carry the genetic code of cells. Khorana was also the first to synthesize artificial genes in living cells. His work remains an important leadership point in biotechnology and gene therapy and has changed the course of future development.

Vikram Sarabhai is known as the father of India’s space program. Sarabhai is known for founding and establishing the Indian Space Research Organization (ISRO) and for persuading the Indian government to implement the space program. As a result, he obtained Guru Rinpoche and Guru Rinpoche. In addition to ISRO, Vikram Sarabhai has supported the establishment of several prominent Indian institutions such as the Nehru Development Foundation and the Indian Institute of Management, Ahmedabad.

These famous Indian scientists are still known for their contributions to the field of science to this day. They dedicated their lives to the world of science and transformed the learning process through their inventions and discoveries. Aren’t they all truly inspiring? Let us know what you think!