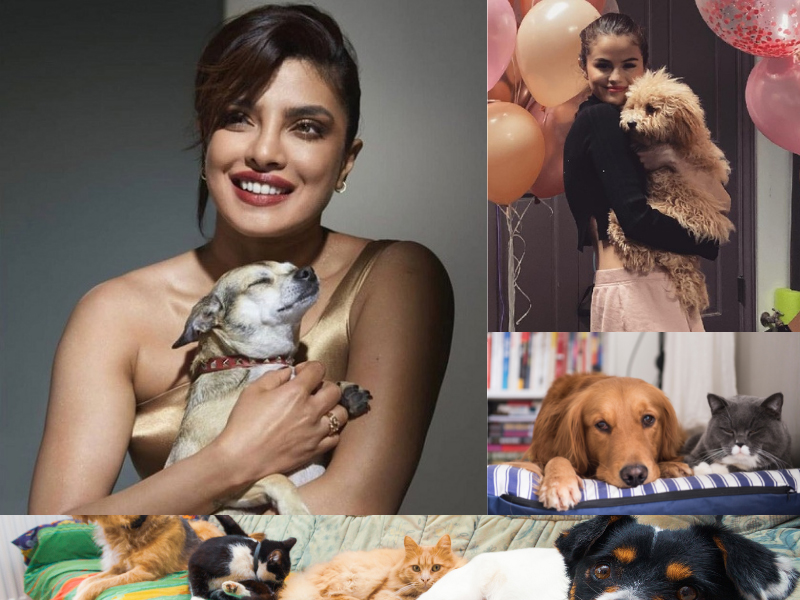 Little fur babies are the best companionship a human being can have. They have a huge impact on our lives, reducing stress, elevating our mood, increasing happy moments and leaving us with lasting memories. Our celebrities are no different from us when we say they love their fur pals. Celebrity pets have huge followings on social media platforms, and they are no less than celebrities themselves.

Today, we round up the top celebrities and their pets in Hollywood and Indian cinema. Pets are our celebrities’ best friends and have a huge impact on their lives. Our stars often don’t get a chance to show off their pet best friends. Are you excited to see the faces of these little furballs? Let’s go!

30 famous global celebrities and their pets in 2022:

Here, we’ve rounded up the top celebrity pets and fur friends for our stars and divas. You may have heard of and know some pets when our celebrities flaunt them on social media, but you must know other famous fur friends. These fur buddies are no less than celebrities themselves, and their cute little pictures make our day brighter!

Edward is number one on our list, especially on the list of celebrities who own cats. If you follow Alia Bhatt’s Instagram page regularly, you know how close Edward is to her. Alia absolutely loves cats and Edward is her furry friend cat with whom she spends a lot of time. Arya adopted Edward five years ago, and she loves spending time with furball. Besides Edward, Alia has another cat fur friend, Juniper, who lives with her sister Shaheen Bhatt. Edward is one of the most famous celebrity cats!

Well, you might have guessed which celebrity dog ​​Diana Chopra Jonas was named after! Diana is the beautiful fur kid and a great companion to Priyanka Chopra Jonas and Nick Jonas. Diana is a Chihuahua mix, a female puppy adopted by the Jonas family. In 2016, she entered the lives of Priyanka and Nick, filling their world with love and happiness. Priyanka regularly shows off her best friend on the Instagram platform, and she also created a page for Diana. No wonder Diana is a celebrity pet with hundreds of thousands of followers.

Shradha Kapoor dedicated her life to her fur partner Shyloh Kapoor. Shyloh has been with Shradha for over a decade and belongs to the Lhasa Apso breed. She nicknamed her paw friend chotu Maharaj and ruled her life, bringing her happiness and love. We often see Shyloh Kapoor in Shradha’s Instagram posts, which is enough to show how much she loves her fur partner!

We can’t take our eyes off Varun Dhawan’s fur companion, Angel! Angel belongs to the Beagle breed and has a cute little cutie look no less than a social media celebrity. Varun loves his furry friend and takes up all his time when he’s at home. Isn’t she cute? She is one of the most popular celebrity dogs in Bollywood.

Not one, but Disha Patani has five pet companions. The heroine has three dogs, Bella, Goku, Chi, and two cats, Kitty and Jasmine. We can understand how much she loves her furry buddy as she has five pets in the house. Bella is a Cocker Spaniel, Goku is a Doberman Pinscher, and Chi’s breed is unknown. Her cats are of European Shorthair and Persian breeds. There is no doubt that she enjoys spending time with her canine companions. They also all have an Instagram account and have thousands of followers.

Bollywood favorite couple Akshay Kumar and Blink Kona have two fur babies named Cleo and Alex. They are German Shepherds and Beagles with whom they have a lot in common. Twinkle Khanna often shares glimpses of her pet pals on Instagram and amusingly chronicles the havoc they wreak in the home, yet makes her life easy. Their child, Nitara, is also very close to pet companions.

Anushka Sharma has her pet friend, a Labrador, which she admits has completely changed her life. The Labrador named Dude is even a fan favorite of Anushka, as she regularly posts snippets of their lives on social media. Anushka enjoys spending time with her fur friends and even works to promote a pet-friendly lifestyle.

Jacqueline Fernandez has a very cute cat companion named Miumiu. The cute buddy belongs to the Persian cat breed and takes up all her time. She even has other cat pals named Yoda, Loki and Shiza, and the heroine admits how her pals spend all her time at home and she loves being with them.

Hash and Sasha are the pets of Tollywood actress Samantha. Although she adopted Hash with ex-husband Naga Chaitanya, she recently let Saasha into her life and introduced her to her fans. Samantha absolutely loves being with them, they make her world shine. According to Samantha, her pets are like her children, stressing her out and giving her a silver lining. Hash and Saasha are pit bulls.

You might have guessed the name of Strom Devarakonda, Vijay Devarakonda’s (not-so-small) pet! He has a white Siberian husky with whom he shares wonderful life moments! Vijay said the little furball stole his heart at first sight and he couldn’t imagine a world that didn’t give him a home. Vijay enjoys spending time at home with Strom and calls him his best friend.

Kajal Agarwal and Gautham Kitchlu recently gave birth to a baby boy and have a new baby pet at home. This pet named Mia changed their lives with joy and laughter. Although the Kollywood and Tollywood beauty often admits to her fear of pets, she has made it public that she will overcome her fears and bring the puppy home. Is it exciting?

Keerthi Suresh keeps posting adorable photos of her pet Nyke (a Shih Tzu breed). The actress brought pet companions into her life two years ago and loves spending time with her friends. Nyke is a frequent presence on the actress’ Instagram account, and fans absolutely love the little glimpses and clips. Keerthi has often acknowledged the role Nyke played in her life when she was feeling down and depressed, and how there was no negativity when she was around her friends.

Kriti Sanon recently adopted a toy poodle puppy named Phoebe. She shared an adorable Phoebe with sister Nupur Sanon on social media platforms. Phoebe looks absolutely lovely and beautiful, and we love that she graces the actress’ life with joy and happiness.

John Abraham was an avid animal lover and was often associated with PETA for the welfare of animals. He recently adopted a stray puppy under unfortunate circumstances and gave her a home and love. John named the puppy Bailey and loved spending time with her. We also often see glimpses of the little beauty on his social media accounts!

Malaika Arora’s dog companion Casper, a Japanese Spitz puppy, came home in 2015. Malaika spends quality time with Casper, much loved by her and her son Arhaan. Especially since she’s been seen spending some stress-busting time with Casper during the coronavirus lockdown, and she’s even been seen playing with puppies on the balcony in all her free time.

Chris Evan’s adorable puppy, Dodger, is a mixed-breed boxer and rescue dog. After adopting his dog pal, Chris kept posting glimpses of their lives on the social media platform. He absolutely loves fur in his home and often talks about how Dodge has changed his life in many ways. Isn’t it cute?

Kylie Jenner has more than a dozen pets; dogs and Norman and Bambi Jenner are the most famous dogs that keep popping up on social media. The Italian Greyhound is her cutest dog and recently, they have given birth to more puppies. Isn’t it cute! While Kylie probably doesn’t post much about her dogs on her profile, they do have another dedicated Instagram account. Norman and Bambi are one of the famous celebrity dogs.

Pyro is Kendell Jenner’s fur buddy and we love her so much. Doberman pinschers have been with Kendall for many years and they have a great time every now and then. In fact, Kendall also took the Pyro on many of her adventures and vacations. Are they super cute together?

TV star Paris Hilton, who owns Prince Hilton, is popular in celebrity circles and is one of the most famous celebrity puppies. The Teacup Pomeranian is said to be one of the smallest Pomeranians in the world. She is often observed to spend a lot of time with her pet and take him around on outings and shoots. Besides Prince Hilton, she has other dogs and takes care of them in the dog house. So, aren’t they super lucky?

Jennifer Aniston is a pet lover and most of her fans already know her love for dogs. She has more than three cubs, all rescued and adopted. Clyde is the newest addition to her family, a Grey Schnauzer half-breed, and Sophie a Pitbull half-breed. The Lord Chesterfield is a white collie mix breed. She had a great time with all her fur pals, often citing them as the naughty people in the house.

Jack and Jill are Leonardo DiCaprio’s favorite dogs. They’re both huskies and they’ve been seen spending a lot of time with the actor and his girlfriend. Viral news also went viral recently when the actor jumped into a frozen lake to rescue his puppy pal. Is it super bold? We can clearly understand how much he loves his canine companion.

Atticus and Boo Radley are Jake Gyllenhaal’s beloved pets. Atticus is a German Shepherd and Boo Radley is a Pug. The actor is often seen spending time with his dogs and often talks about them in several public appearances and interviews. They take the center of his world and we love these lovely photos.

Zendaya has the cutest dog ever named Noon Coleman. She has a black miniature schnauzer, the cutest little animal we’ve ever seen. She is ultimately a dog lover and is often observed spending a lot of time with her pet companions. We often see glimpses of her having a good time with Noon.

Daisy, the rescue dog adopted by Selena Gomez, is so charming. Daisy looks so adorable, like a little goofball, and we understand why Selena Gomez’s heart melts for this puppy baby. A mix of Shih Tzu, Bichon Frise and Poodle, Daisy is the perfect companion for the heroine in all her adventures.

Katy Perry may both be superstars and singers; however, when she’s at home, her focus is on her beloved dogs and puppies, Nugget and Butters. They’re both teacup poodles, a miniature breed that’s as adorable as the Munchkins. Both pets seem to be in the spotlight on social media, given the way she’s greatly showing off her love for puppies.

These are Harry Potter star Daniel Radcliffe’s dear pets. Binka and Nugget are from Border Terriers and have been with Daniel Radcliffe when he is at home. While Daniel doesn’t like too much social media attention and limelight, we rarely see his life with pets.

Hugh Jackman has two adorable puppy friends, Dali and Allegra. Dali is a poodle mix, Allegra is a French bulldog, and we often see the actor sharing his good times with his canine pals. The two of them are really cute and have a lot of fun together.

The picture of heroine and actress Amanda Seyfried with her sidekick Finn is absolutely adorable, absolutely adorable. The actress has an Australian Shepherd and they are often seen together in photos and videos on social media. Amanda even attended several public events with…