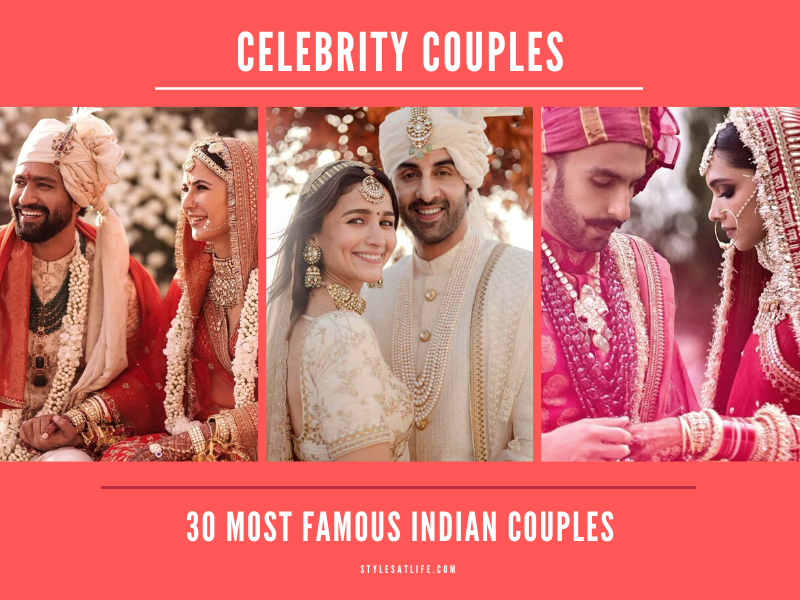 These high-profile couples are quite famous in India. They are very successful and talented; and are popular for their love stories with other celebrities before marriage. These lovebirds are always in the public eye; the paparazzi love them, and so do their fans. These famous couples have inspired and redefined what love means, and we love their chemistry. Wondering who are we talking about?

Today, we have something exciting and spicy to share with you. The most famous couple in India! These lovebirds get the most attention from paparazzi and social media, and their personal lives spark the interest of all Indian families. Some of their love stories are amazing and we love sharing their journey with you. Are you excited too? Tag with us to learn more!

These famous couple marriages are our all-time favorites. Their love is inspirational, like a town B romance. Today, the famous couple is married, and we can’t wait to give you a glimpse into their romantic life. So, let’s explore more about Indian weddings and famous couples!

Commonly known as Virishka, the couple is one of several fan-favorite Indian Bollywood couples. Virat and Anushka first met in 2013, when they were filming a commercial. Rumours of a possible romance persisted, and they later made multiple appearances together and made the news public. The two got married in Italy in December 2017. They both have a daughter, Wamika. They are one of the most famous movie couples in India.

Ranveer and Deepika have been in love since meeting on the set of Goliyon ki Raasaleela Ram-Leela in 2013. Although the two have had different partners before this, they found true love and have been inseparable ever since. They are indeed a source of inspiration for contemporary youth. Deepika and Ranville got married in 2018 in Lake Como, Italy, and have been happily ever since. We absolutely love these Bollywood couples!

How could we miss talking about the King of Bollywood – Shahrukh Khan! Shah Rukh and Gauri Khan’s love has lasted for more than three decades. They have an inter-religious marriage because Shahrukh is Muslim and Gauri is Hindu. However, their love is above all else. The two married in 1991 and have three children together, Aryan Khan, Suhana Khan and AbRam Khan.

The “it” couple in Bollywood are Saif Ali Khan and Karina Kapoor. Saif Ali Khan is previously married and has two children (Sara and Ibrahim) with Amrita Singh. However, he found love in the arms of Kareena Kapoor in 2008, when they were both filming the movie “Tashan.” Celebrity couple Khan and Kapoor dated for five years before marrying in 2012. There’s a 13-year age gap between the two of them, but that doesn’t bother them. Today, Kareena and Saif both have two sons, Taimur and Jeh.

MS Dhoni is India’s most popular cricketer and an inspiration to many of us. He has been one of the most famous captains in the world. Sakshi and Dhoni have known each other since childhood, however, they rekindled their love around 2007. They got married in 2010 and now have a cute little girl, Ziva, who was born in 2015. They are definitely two goals!

According to us, Abhishek and Aishwarya set their couple goals first before we see contemporary marriage in Bollywood’s new age. They both have an age gap of three years, and Aishwarya is older than Abhishek; however, it doesn’t seem to affect the lovebirds at all. They got married in 2007 and are a charm to witness. Abhishek and Aishwarya have a lovely daughter, Aaradhya, who was born in 2011.

Well, you will be shocked that our Bollywood couple also found love through arranged marriages. But looking at the chemistry between Shaheed and Mila, most of us don’t believe it was an arranged marriage. Shahid and Mira, who have an age gap of about 13 years, met through family ties in Delhi. Shaheed is 34 and Mira is only 21. However, as they say, true love is blind. The two got married in July 2015 and have a son and a daughter.

Talk about India’s business tycoon; we only know Mukesh Ambani. But Mukesh Ambani is not only an inspiration for his business personality, but also how he allows his family to spend time with his love, Nita Ambani. They both met through Mukesh Ambani’s father, Dhirubhai Ambani, and got married in 1985. Although it was an arranged marriage, they have been strong and often meet in public. They have three children, Isha, Akash and Anant Ambani.

Kajol married Ajay Devgan at the height of his career, and if it was the right move, everyone in the celebrity circle would raise an eyebrow. Well, there is no right or wrong in love, it turns out to be the same. Ajay and Kajol developed the chemistry in the 1995 movie Hulchul. They both dated for four years and got married in 1999. They now have two children, Nysa and Yug Devgan. However, they keep a low profile but are always together.

Another couple challenging the age gap are Sachin and Anjali Tendulkar. Anjali is six years older than Sachin; however, it was love at first sight for Sachin, and he couldn’t let go and pursued Anjali. They were married in 1995 and have two children, Arjun and Sara Tendulkar.

Priyanka Chopra Jonas and Nick Jonas are a new age couple who encourage young people not to give up on any love that could happen. Priyanka found love in Nick when he moved to the US to pursue a career and has never looked back since. Nick is ten years younger than Priyanka, but married in 2018 in Rajasthan, India. Additionally, they recently welcomed their daughter Maltie Marie Chopra Jonas through surrogacy.

Akshay Kumar and Twinkle Khanna are one of the most popular couples in Bollywood. They married in 2001 after dating for about two years. Today, they have two children, a daughter Nitara and a son Aarav. They are stronger than each other every day.

If you asked us who is the cutest yet underrated couple in India, we would say Genelia and Riteish Deshmukh. Despite religious differences and family issues, they both waited a long time to get married. They are just pure couple goals. Today, whenever they appear in public, we can see that the two of them are totally in love. Genelia and Riteish have two sons, Riaan and Rahyl.

Vicky Kaushal and Katrina Kaif recently got married in 2021 and fans are going crazy. They have kept their relationship secret from the public. However, rumor has it that they have met since 2019. Fans are very excited about this new set for the power couple and we wish them all the best!

Karan Singh Grover and Bipasha Basu met in their movie “The Solitude” and then got married soon after dating for a while. While Karan was married twice before Bipasha, many were concerned about whether the marriage would last. However, they have been going strong since 2016 and have shared many personal memories on their social media pages. Karan is five years younger than Bipasha, but as we all know, age doesn’t matter in love!

Little is known about the relationship between Vidya Balan and Sidharth Roy Kapur. The couple prefers to keep a low profile and not reveal their private memories to the public. However, they married in 2012, which shocked the public as many did not know they had been dating. However, they are still going strong and looking happy.

Neha Dhupia and Angad Bedi are another Bollywood star couple. While their wedding did shock the public, it was one of the year’s. They met through mutual friends, dated for about four years, and married in 2018. Neha is more than three years older than Angad; however, that doesn’t seem to stop them. Today, they have two children, Mehr Dhupia Bedi and Guriq Dhupia Bedi.

Sanjay Dutt is notorious for his wedding and divorce with ex-wife Rhea Pillai and Richa Sharma. However, he found his love in his girlfriend Manyata Dutt. They were in love for about two years and got married in 2008. They have two sons together, twins Shahraan and IqraDutt. So, what do you think of these celebrity couples?

Ayushmann and Tahira were childhood sweethearts and their love story melted our hearts. The pair have known each other since then and got married in 2008. This couple is one of the simplest of Bollywood movie couples. We love and adore how they support each other and stand together in every personal and professional high and low. Ayushmann and Tahira have two children together, Virajveer and Varushka Khurrana.

Alia and Ranbir are now married in Bollywood. The power duo have been dating for about five years since they officially confirmed their relationship in 2018. Fans always appreciate and wait to get a glimpse of this celebrity couple’s relationship! In April 2022, they finally had their long-awaited wedding at their Mumbai residence. We can’t take our eyes off these lovebirds and the way they look at each other. Do you agree? !

Rajkumar Rao and Patralekha are our favorite B town couples. Rao and Patra had known each other for over a decade before getting married in November 2021. They have always been lovers of the industry, but have kept it very simple. We love their chemistry and their photos on social media.

How can we talk about the famous couple in town B and miss the legendary Amitabh Bachchan and Jaya Bachchan. They are both movie stars and have grown up for over five years. Amitabh and Jaya were married in 1973 and have one son, Abhishek Bachchan, a movie star, and Shwetha Bachchan, a writer and model. They still inspire our old school love forever. When we think of the best and most famous classic celebrity couples with the longest marriages, the Bachchans are definitely one of the names that comes to mind!

Shreya and Shiladitya’s relationship was not known until their marriage. The best part of their marriage is that they have known each other since school days and have been best friends for many years. They had a low-key and intimate wedding in 2015. Recently, Shreya gave birth to a son.

Varun and Natasha’s wedding is another Bollywood favorite. Many stories revolve around how Warren wooed Natasha multiple times before she fell in love with him. However, the rest is history as the two dated for several years and tied the knot in 2021. They are rarely clicked in public, but presumably enjoy each other’s company. They are indeed one of the hottest couples in India.