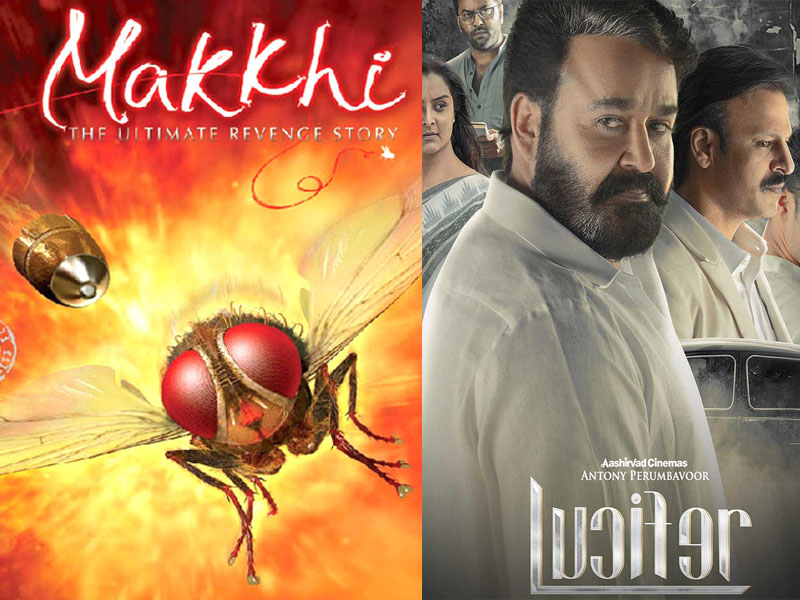 South Indian films are known for their commercial success. Their storylines, captivating performances, action scenes and more have a huge fan base around the world. Most of the South Indian movies are dubbed in Hindi and we often watch them on Hindi movie TV channels. Dubbed movies are also hugely loved by Hindi audiences in North India! Today we are going to discuss with you such Hindi dubbed South Indian movies!

If you are interested and looking forward to watching South Indian movies in Hindi, this latest guide will help you. continue reading!

Now, let’s move on to explore the best and most famous South Indian movies dubbed in Hindi. They are the go-to for audiences and a big plus for entertainment. Listen to them!

A. Tollywood/Telugu movies dubbed in Hindi:

Telugu, commonly known as Tollywood movies, undoubtedly has a huge fan base. In fact, it has one of the largest turnovers, big budgets, and the largest number of releases in the film industry, and even ranks among the best in the world. So we have the best, funniest and most popular Telugu or Tollywood movies dubbed in Hindi. Want to hear from them? !

The movie “Eega” was a huge hit among Telugu audiences. Even though the movie is over, it’s fun and still gripping. This thriller and suspense film revolves around the death of the heroine’s lover, who is reincarnated as a housefly to save her life. The movie is available on YouTube and Hot star.

The Allu Arjun Starrer movie Na Peru Surya Na illu India is another super hit in the Telugu industry. This dramatic film is about a soldier and his anger management issues. The movie is available on Zee5.

Vijay Devarakonda has become a Bollywood heartthrob and his Telegu movie “Dear Comrade” is one of the best entertainers. The film, which developed a unique storyline around the young couple’s love interest and the actor’s life as a student leader, was a hit at the box office. It is also dubbed into Hindi and available on YouTube and Amazon Prime.

Allu Arjun is certainly one of the favorite heroes of several girls in India, and his films are often seen as dubbed in Hindi. We have another film about a man charged with punishing those who evade the law. It’s a nice watch that works on YouTube and MX players.

Mahesh Babu’s thriller and mystery entertainer tells the story of a schizophrenic musician’s struggle to find the man who murdered his parents. Known as Ek Ka Dum in Hindi, the film is available on YouTube.

While Rajamouli is now world-famous, he was also incredibly talented in his original film. So, we have Magadheera, played by superhero Ram Charan and beauty Kajal Agarwal, also known as Hindi. It’s available on MX Player and YouTube.

Vedam may be a low-key movie, but it’s worth watching. The film revolves around five strangers whose lives have nothing to do with each other meeting in an attacked hospital. This is a multi-star movie with a unique and creative storyline. The movie is also available on YouTube and MX players.

The romantic movie Tholi Prema starring Varun Tej and Rashi Khanna is a beautiful and delightful film. It’s dubbed in Hindi and available on Zee5!

Naga Chaitanya movie, Savyasachi is another good movie to watch. Action films and romance films revolve around the protagonist suffering from alien hand syndrome and repeatedly unable to control his emotions. It’s available on YouTube and MX players.

Shekar Kammula movie Fidaa starring Sai Pallavi and Varun Tej is another delightful and beautiful movie. It sails smoothly in a romance between two young men. Dubbed movies are available on Amazon Prime and MX players.

B. Kollywood/Tamil movies dubbed in Hindi:

Just like Telugu, there are also some very good Tamil or Kollywood movies available in Hindi dubbed versions. If you like the unique script and intense storyline that Tamil-speaking audiences love, they’re worth a watch.

Samantha’s Tamil and Telugu original film “U-turn” is another huge success for the Southern film industry, revolving around traffic violations and mysterious deaths. Dubbed movies are available on YouTube, MX Player and Prime.

Suriya’s recent films revolving around caste discrimination and brutality in the Tamil-speaking industry have been very popular. The film has even been dubbed into Hindi and can be viewed on Amazon Prime.

The film is based on science fiction themes. Played by Surya, the film has a unique script that revolves around a scientist who invented a time-travel watch and who must protect it from his brother who wants it. Available in Hindi on Hotstar and YouTube.

The movie Vikram Vedha is a timeless watch and treat as it features super actors Madhavan and Vijay Sethupathi. The film revolves around cops and criminals and navigating between right and wrong in life. It has a Hindi dubbed version and can be viewed on YouTube, Hotstar and MX players.

Vikram starrer, Anniyan, talks about multiple personality disorder, a person who becomes an innocent person, a romantic love boy, or a person who kills the evil people in the world. If you like action movies, this is a great watch. It’s available on YouTube and Zee 5.

Thriller and crime film, Ratsasan is based on a police proposal to catch psychotic killers and catch schoolgirls to kill them. This is a great watch, especially if you like creepy storylines. It can be watched on MX players.

The action film Thani Oruvan, starring Jayam Ravi and Aravind Swamy, is based on a scientist obsessed with illicit behavior. So the police faced the challenge of exposing him. Hindi language can be viewed on YouTube.

Dhanush Starrer, Asuran, is an action-based drama that revolves around a high caste killing a low caste in a village, and how the hero protects his son. It’s an exciting storyline and emotional to watch. It’s available to watch on Amazon Prime.

Rajanikanth, Vijay Sethupathi, Simran and Trisha’s multi-hero movies are available on Prime and Voot. It’s a blockbuster and great entertainer, revolving around the life and past of a college dorm administrator, played by Rajanikanth.

Rajanikanth starring Darbar is a good action movie if you like intense drama and tight movies. It is available in Hindi on YouTube and Zee5.

Malayalam movies have been on the rise recently for their experimental and creative stories. They have very good actors and often entertain the audience with a gripping mood. We also have some of the top movies from Mollywood dubbed in Hindi!

The Malayalam mega-hit Lucifer starring superstar Mohanlal is based on a battle between two groups following the death of the state’s chief minister. It’s based on the political thriller genre, and it’s pretty intense. It can be watched on YouTube.

A crime and thriller film, Theevram is a tense and complex story that revolves around the body of a rickshaw driver’s wife found in different parts of the city. It is available on Youtube and MX players.

If you like great filmmaking and scripts with thrilling stories, this movie is for you. City of God is a Malayalam film, dubbed version available on MX Player and Youtube.

If you’re a movie fan, you’ve probably heard of this name. This is based on the true story of a Malayali nurse working in Iraq who was kidnapped and how she was rescued. The thriller is available in Hindi on Voot and Youtube.

As the name suggests, the film revolves around the father-daughter relationship and the concerns that arise when a child goes missing. It’s a hit movie starring Mammootty. Now available on Youtube in Hindi.

Another hit suspense drama follows a High Court lawyer who receives a threatening call from an anonymous source and must find out who did it with the help of the police. This movie is an interesting thriller.

Crime thriller Runway, known as Prison in Hindi, is set against young people who are involved in illegal activities due to financial problems. Available to watch on Youtube.

Mohanlal starring Kurukshetra is a film based on Kargil’s conflict between India and Pakistan. If you like intense war-based movies, this is a great watch. Dubbed movies are available on Youtube.

This shocking film is perfect for anyone who can sit back and watch an intense and creepy movie. The film is popular even among Bollywood audiences and can be watched on YouTube.

The movie chess revolves around the film’s protagonist, who must survive several tricky situations in his life through ingenious skills. It’s a dramatic and exciting episode that can be watched on Youtube.

There are also some Kannada or Sandalwood movies dubbed in Hindi, which are interesting. Check it out!

Well, we don’t need to talk about this movie. At launch, it was a national phenomenon and was even available to watch in the Hindi dubbed version. You can watch it on Prime and Voot.

This suspense thriller became a hit upon release. The plot is based on a police officer who, despite not being in the crime department, is informally involved in the case and trying to solve it. Available to watch on Youtube.

If you want an exciting storyline, the thriller Rangi Taranga is a good choice. The Hindi dubbed version of the movie is available on Youtube.

Thriller and action movie, Ugram is one of the best Kannada movies of late. It’s packed with action scenes and is the perfect entertainment watch. It is available in Zee5.

While we love sandalwood action movies, Hubley deserves a special place. The film is the perfect mix of action scenes and investigative stories. It has a dubbed version on Youtube.

The action film Mufti is one of the most prominent films in the Kannada film industry. It is based on a police officer wanting to get justice by grabbing a ruling Don. The movie can be viewed on Youtube.

If you’re looking for entertainment without any mystery and pure joy, this is a good movie to watch. Puneet Rajkumar did a great job in this film, which is available on Youtube.

It’s a pure love drama about a young couple that has to go through several issues in their relationship. This movie is perfect for weekend entertainment and is available on Youtube.

Available on Youtube and zee5, this Kannada dubbed Hindi movie is one of the best new era hits in the romantic comedy genre. Yash and Kriti Kharbanda star in this film.

The crime thriller Rakshasa has been remade as Kaliya No.1 in Hindi and is a good choice for those who love twisty movies. The plot of the movie is based on a policeman hunting Downs. It can also be found on Youtube.