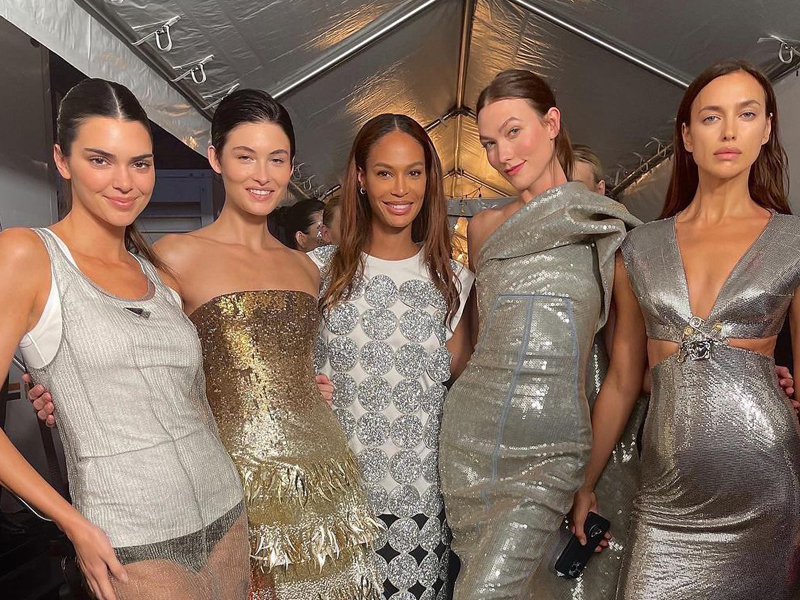 Top 20 Hottest American Models on the International Stage in 2022

Top 20 Hottest American Models on the International Stage in 2022

From top veterans and all-time famous models and celebrities to newcomers and rising superstars, America has always made way for many to make their dreams come true. Today, we have the most popular American models to talk to you about! In addition to their fashion sense and iconic looks, these super-hot American models have also made quite a splash in the fashion world for their sexy and glamorous looks that they exude. While some of these female models may already be known by their names, others are rising stars worthy of our attention.

Do you want to know who is on our list of America’s top female models today? Read on to learn more.

The women on these lists are known as fashion superstars. They are known for their beautiful looks and iconic looks every time. Each of their appearances is a dream. Let’s move on to all of America’s top models in fashion this year. here we go!

The top model on our list today is Kendall Jenner. This young beauty is currently ranked number one among the highest paid models in the world and has maintained that position for many years. Kendall rose to fame by starring in the reality show Keeping Up With the Kardashians and hasn’t looked back since. Kendall has been a model since the age of 14, working for many brand events and fashion shows and representing many luxury brands around the world. Her initial breakthrough came after she took part in fashion weeks for top international designers in New York, Milan and Paris since 2014. She is also one of the most searched models in the world. She is one of our most famous American fashion models.

Without a doubt, we all know the famous Hadid sisters. They changed the entire course of the fashion industry with their stunning looks and iconic talent. Bella Hadid is another top and highest paid model in the world, representing and being the face of several luxury brands. Her effortless style, seamless look and sleek gait captivate audiences with a magical feel.

Another Hadid sister who dominated the runway was Gigi Hadid. Since she entered the fashion industry, she has been the talk of the fashion town. Her bold looks, confidence and amazing attitude on the runway set her apart. She is also one of the highest paid models in the world. She has appeared on the covers of Vogue and many other top fashion magazines many times.

Joan Smalls is one of the most popular and gorgeous babes in America. She is one of the famous Latin American models and the first person to represent Estee Lauder, a top international brand. She is also one of the highest paid models in the world, campaigning and walking for international luxury brands and brands. Joan Smalls even appeared in the Beyonce video for the song Yonce.

Another top model from America that we all know is Kylie Jenner. This young beauty is now one of the most popular models in the industry. She recently launched the hit Kylie Cosmetics and her lip kit has been a huge trend. She is now a very successful model, businesswoman and influencer. The heroine is now top of the list of America’s hottest models.

While many may not know the name Kaia Jordan Gerber, the young beauty is one of the top running models in America this year. The diva, model and actress is Cindy Crawford’s daughter and has been in the spotlight ever since she was named Model of the Year at the British Fashion Awards. She has worked for international brands such as Versace and Calvin Klein campaigns and has a long way to go. What do you think?

Most of you have probably guessed her name among America’s Top Models. Kate Upton is an icon who quickly gained attention and success after she was photographed for the first time in the last decade for a Sports Illustrated swimsuit issue. She has appeared in several major publications such as Harper’s Bazaar, Vogue, GQ and several other Sports Illustrated. Even now, she is one of the top models in the world and represents several international brands.

Stunning diva Karlie Elizabeth Kloss is a popular American female model who entered the spotlight at the age of 17. Vogue Paris put her name in the top 30 female models of the time, and there was no turning back. Born in Chicago, she has appeared on the covers of international fashion magazines many times, winning applause and awards many times.

Quinn Mora is a popular model from the United States. Known for her sleek, modern looks, the young model has recently gained momentum after appearing on the cover of Vogue Korea in December 2021. She has a huge following on Instagram and has recently appeared at the Chanel and MiuMiu fashion shows.

Teen beauties are not well known in the fashion world. But when it comes to size, inclusivity, and a confident look, the diva has quite a voice. Devyn Garcia, managed by US DNA Modeling Agency, was born in Florida and is now gaining momentum. She was recently featured in the Spring 2022 collection as she represented the brand with her natural yet glamorous looks. She has walked the catwalks for famous shows such as Brandon Maxwell, Chloe and Altuzarra.

Ella Emhoff is another rising model for 2022. She’s in her early 20s and has walked for MiuMiu and Balenciaga, where she stole the show and made her way. She is becoming an icon in the fashion industry and is gaining attention for her style and taste. Ella has appeared at the Met Gala and walked for luxury brands in Europe.

Young model and TV personality Hailey Baldwin is another internationally popular figure in the fashion industry. She has been representing multiple brands on their shows such as Guess, Ralph Lauren, Tommy Hilfiger and many others. Although Hailey has also acted in movies and some TV series, she often appears as a model because the profession is close to her heart.

Speaking of the plus-size model movement, the first thing that comes to our mind is Ashley Graham. Beauty is known for breaking down stereotypes and gender barriers, setting specific universal beauty standards. In addition, she has always advocated being positive and confident about different body types. The heroine is one of the most famous American models to date.

Born in Illinois in 1996, the young beauty Taylor Hill has taken the fashion world by storm with her glamorous looks. She is a Victoria’s Secret Angel and is now one of the hottest models in America. The diva started her career in 2013 and has worked for a number of brands and luxury goods companies such as Michael Kors, Ralph Lauren. She has also appeared on the covers of magazines such as Vogue, Elle and Harper’s Bazaar.

Camila is one of our current favorite and most attractive American models. Born in Los Angeles, California in 1997, Camila is a rising fashion star who has walked the catwalks for several international brands. The actress went a step further with a Rising Star Award in 2018 and even featured in Vogue in 2016, putting her in the spotlight. She is also in the news with Hollywood pop actor Leonardo DiCaprio.

Jasmine Tookes is a popular African American model. She dominates the American fashion world with her glamorous and stunning hot looks. Jasmine started her modeling career at the age of 15 and has been a Victoria’s Secret Angel. She has also represented several brands such as Tommy Hilfiger, Calvin Klein, etc.

While we’re talking about the way plus-size models are changing the fashion industry, we’ve got another model to talk about in this regard. Marquita Pring is America’s top model, favored by several brands and top designer clothing companies. The plus-size model from the US has worked for brands like Levi Strauss, Mark and Spencer, Polo and more.

Heidi Mount is another famous American model who has been in the business since she was 12 years old. She has walked for internationally renowned brands such as Michael Kors and Versace. Her attractive blue eyes and blonde hair make her quite unique compared to others, and she has striking facial features.

Crystal Renn is another top American model and a rising star in the fashion industry. The diva also entered the fashion modeling industry as a teenager and has been quite successful. She has collaborated with several world-renowned brands and designers and walked the catwalks during all fashion weeks.

So how many of these American models do you know very well? Let us know what you think and your favorite on this list. We are happy to hear from you!